Our long awaited and very carefully planned road trip from Thabazimbi RSA through to Malawi and back down to Hwange, Zimbabwe was here.
The German (other half) has packed everything very meticioulasly, (like only a German can), and away we go, early on Saturday, the 28th , making a pit stop at Lephalale for breakfast and then off the Alldays and then Musina to reach the border post of Beitbridge between South Africa and Zimbabwe.

Well, and this is where the fun started. The border post was absolutely chaotic and being the main border post between the 2 countries, with millions of Zimbabweans working in South Africa, due to the economic and political problems in Zimbabwe, it is a nightmare. Thousands of mostly Zimbabweans waiting, with us maybe number 4001. Within a blink of an eye, 4 African gentlemen were upon us, with friendly smiles and “sir, let us help you to pass quicker. A very small fee”. I am not going to elaborate, as we did pay a bribe, but in the end it was a huge amount and after 40 minutes on the South African side and over to the Zimbabwean side, which took another 2 hours, with these gentlemen, who I know started to call ‘Tsotsies”> (slang for thieves and scammers), trying to extract more and more money from us, until I told them in no uncertain language (and not very ladylike), to take a flaming hike. And with no hassles after that, besides the German now in a mighty bad mood, we crossed border into Zimbabwe. 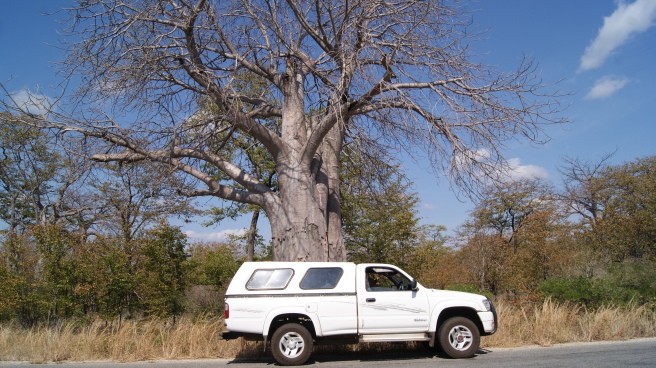 It was now getting dusk, so we decided to stay at the nearest lodge/motel/hotel or anywhere we could find. About 80km from the border we found Bubi and the Bubi Village Motel, which is basically a truck stop and after $60 dollars passed hands, we had a room, with a bath and lots of hot water. Although it is a truck stop, it was very clean and we manage to have a plain but very eatable supper of Beef Stew and Sadza (local name for porridge and which we call pap in South Africa). The road from Beitbridge to Bubi is covered with burnt out truck, busses and motor vehicles and it is not advisable to travel at night on this road further than Bubi.

We left the following morning early to reach Masvingo to visit the Ancient City (Zimbabwean Ruins). At $15 per person, it is not really cheap for us South Africans, however, it is really worth the effort as it is very interesting and if you are interested in history , it is a must see. As it was obviously to the whole Zimbabwean nation by now, myself and the German had ‘show us the money”, written on our foreheads and we picked up a guide, or he rather picked us up on top of Hilltop , the enclosure for the King , appointed himself as our guide, with this limp and walking stick and off we went after him. By choice or no choice, we were stuck with him. As by now I was fed up with forever just having to give hand outs, I refuse to pay more than what we would have paid for a registered guide at the reception office. In hindsight, we were happy he latched onto us, as at least we now understood more of the ruins. We visited the Main Enclosure as well and this is where the King’s wives as well as all the other females lived. Only his sister was allowed to live in his enclosure. It is a beautiful ruin, no less beautiful than any other ruins which one might find anywhere else in Europe. As a person who loves history more than modern day life, I loved visiting the Ancient City. And poignantly when we were in the Main Enclosure, we could hear the faint sounds of drums, like it was resonant in the stones in the walls of the City. And I would not be surprised if it could be. However on this occasion, it was merely a nearby village where they had a ceremony and were using their traditional drums. 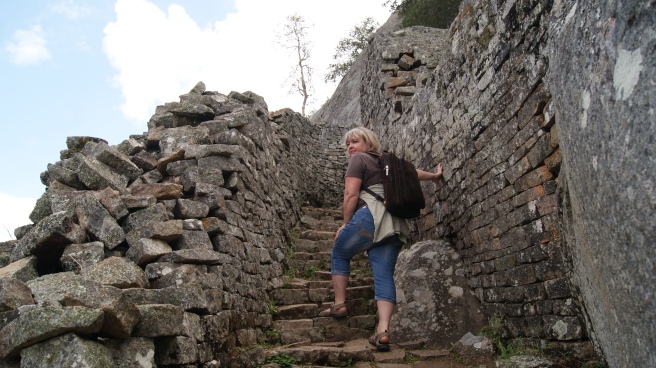 We decided to make a quick detour and visit Lake Kyle and the little chapel at the dam wall with a very sad history.
A girl and her parents visited the chapel on the road to Mutare, which the Italian Prisoners of War built. It is quite beautiful and the girl,fell in love with this chapel. She begged her father to build her a small chapel exactly like the chapel the Italians build for her wedding day. Stone by stone and little coloured window panes, the little chapel at the dam wall took shape with seating for 12 people, in anticipation of the daughter’s wedding. Sadly she never lived to get married in her little chapel, build with so much love by her father, as in 1970, she died in a car accident. Her parents were heartbroken. But the little chapel has seen many young couples married there since, as her father left it open, so other could have the joy of the little chapel.

We left Masvingo to travel through to Harare in order to make up some lost time, spent at the by now hated Beitbridge. As the German did not want to stay in Harare, we travelled on to Chinhoy looking for accommodation close by as I wanted to see the Chinhoy caves. The Chinhoyi caves were discovered in 1887 by famous European hunter, Frederick Selous. Before that, it was thought that the caves were used by outlaw Nyamakwere who threw his victims’ bodies into the ‘Silent Pool’. He was eventually killed by Chief Chinhoyi, who lent his name to the nearby town.

Chinhoy is a bustling African town and we stayed at the Chinhoy Motel at the caves. Expensive for South Africans with African amenities. One can see the way it used to be in its hay day and one can imagine people around the pool and bar and wide stoep. But now, the rooms are all rundown with nothing changed since perhaps the 70’s. And what a disappointment that we could not see the caves, as one: they don’t accept ZAR and two: no electricity and the generator not working, so one could not go down the caves.

By now, I was slightly peed off with Zimbabwe, as not only were we ripped off financially wherever they could with inflated exchange rates, but all of a sudden, I was now also informed that our ZAR currency, which by the way is their official currency together with the US Dollar, is not accepted as the government said our rand is to low against the US Dollar for their liking. The CHEEK! Although most of the Zimbabweans are friendly, the feeling I have of Zimbabwe is of a country which is in a time bubble, stuck in the 1970’s.
We left Zimbabwe, to travel on to Zambia, not with a feeling of “yes! We would love to visit again”. But rather a sense of sadness, that a country can deteriorate like that under a Government who is only there to look out for their own pocket, leaving the rest of its people and land to rot.